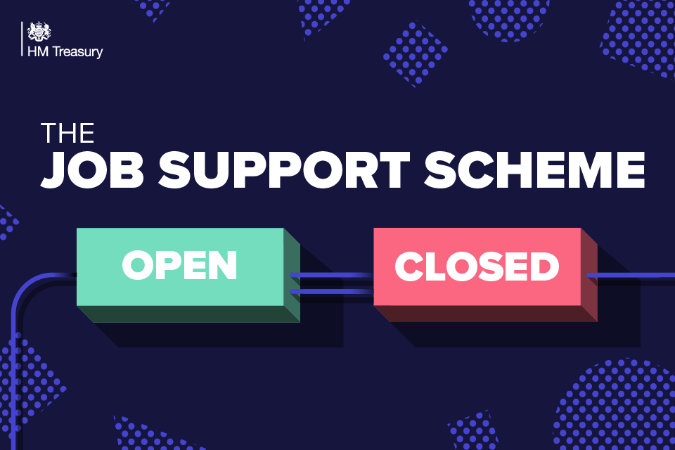 Millions of jobs will continue to be supported as Job Support Scheme launches. Scottish hospitality sector launches ‘SOS Save our Jobs’ billboard campaign across central belt.

Millions of jobs will continue to be supported over the winter months with the government’s JSS available to businesses across the UK from Sunday, 1 November.

I’m pleased that the IMF this week called our response to the pandemic one of the best examples of coordinated action globally – the furlough scheme has been central to that, supporting 9.6 million jobs through some of the most challenging economic times.

The Jobs Support Scheme will continue to protect jobs throughout the difficult months ahead and is part of our comprehensive Plan for Jobs.”

The JSS scheme launches on Sunday and is designed to support businesses across the whole of the UK who are either legally required to close or facing lower demand over the winter months. Under the JSS Open part of the scheme, which was made more generous last week, the government contributes 62% towards the wages of staff for the hours they do not work, whilst the employers pay just 5% plus NICS and pensions contributions. Employees receive a minimum of 73% of their wages.

Under JSS Closed, which is for businesses legally required to close due to coronavirus restrictions, the government will pay two thirds of each employees’ salary with employers just covering NICs and pension contributions, a very small proportion of overall employment costs.

Firms who retain staff that have previously been furloughed until the end of January will also receive a £1,000 per eligible employee payment under the JRB.

Taken together, the two schemes (JSSO and JRB) will cover 95% of the employment costs of the average previously furloughed employee until the end of January.

For those earning less than £1,100 per month the JRB offsets all the employer costs of the JSS Open– meaning businesses will not have to make any contributions. Under the original CJRS around half of furloughed workers had earnings below this level.

For many lower earning employees on Universal Credit (UC), the combined impact of the support of the JSS and UC will mean they could receive around 90% of their normal net income (whilst working only 20% of the hours).

The CJRS closes on Saturday 31 October ahead of the JSS launch on Sunday 1 November. As the scheme draws to a close new data published by HMRC shows that during the scheme’s eight month life it has protected 9.6 million jobs through some of the most challenging economic times the country has ever faced – with 90% of those coming off furlough by August returning to the same job.

The JSS and JRB are just one part of our generous package of measures, that includes the extended business grants and Self-Employed Income Support Schemes announced last week, which will continue to support businesses and livelihoods across the country over the winter months.

Some of the top names in Scottish hospitality are launching a new ‘SOS Save Our Jobs’ campaign by taking over around 50 giant digital billboards to promote their message to hundreds of thousands of people across the central belt from today.

The campaign aims to spell out the impact of Scottish Government imposed restrictions on Scotland’s licensed hospitality industry and pleads with the public to help by writing to their MSP in support of the industry to help save 100,000 jobs.

The campaign is being backed by  Scotland’s hospitality organisations, including the Scottish Licensed Trade Association, as well as Michelin star chef Tom Kitchin, Nic Wood of pub and bar collection Signature Group, James Thomson of Prestonfield and The Witchery, Edinburgh’s Carina Contini and the Scotland-wide Crerar Hotels group.

The campaign highlights the fact that thousands of jobs are at risk right across the sector – from pubs, to hotels, late night venues to restaurants, including the associated jobs relating to those that supply the industry.

This new ‘SOS Save Our Jobs’ campaign saw staff from the hospitality sector posting selfies on social media using the hashtags #SaveOurJobs and #ScottishHospitality to highlight the faces behind the jobs under threat.