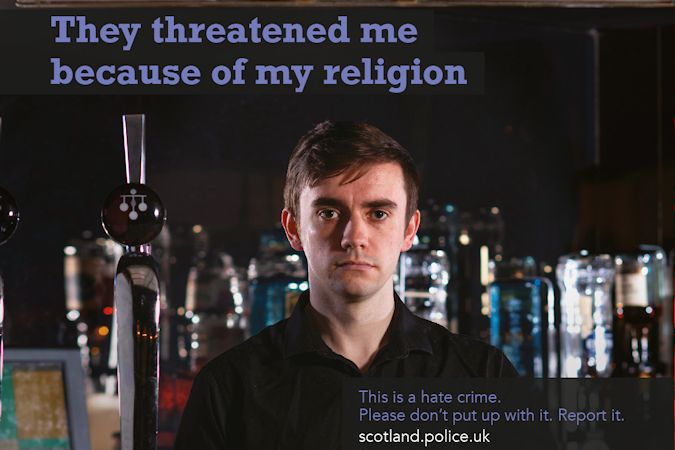 Police Scotland is focusing on workers in the night-time economy in an effort to encourage more victims of hate crime to come forward.

Launching a new hate crime campaign, running from February 18 until March 10, Police Scotland wants to raise awareness of the issue and ensure night-time workers – as well as the wider public – reports these crimes.

Feedback from police officers and partners shows workers in late-night industries such as fast-food outlets and convenience stores as well as taxi drivers and door security staff are most at risk of experiencing hate crime.

Over 6,700 hate crimes were recorded in Scotland in 2017/18 with 66% involving people being targeted because of their race. Sixteen per cent had a sexual orientation aggravator and 7% a religion aggravator.

Chief Superintendent John McKenzie, Head of Safer Communities, said: “Hate crime can have a devastating impact upon victims, their families and wider communities. It can leave victims feeling isolated and fearful of what might happen next. It’s important people know they can report it and how to report it.

“We work with partners including the Scottish Government to raise awareness and encourage the reporting of hate crime.”

If victims don’t feel comfortable reporting the matter directly to police they can report to third party reporting centres which have staff that can identify hate crimes and offer support to victims, Chief Superintendent McKenzie added.

The Safer Communities department within Police Scotland has a scheme whereby officers across the country can be “hate crime champions”. This means they are trained to provide advice and support around hate crime to other police officers and police staff.

If you have been a victim of a hate crime, please contact Police Scotland on 101 or speak to an officer. A list of third party reporting centres can be found on the Police Scotland website.