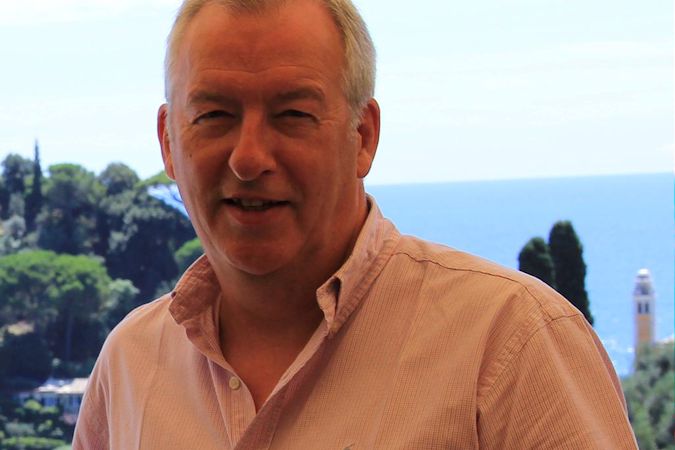 IT’S A crisp April morning and Jim Grierson is typing away on his phone as I arrive at Gleneagles to meet him for coffee. It sounds somewhat extravagant but it’s the perfect meeting spot for both of us – a relaxed atmosphere, no hassle getting parked and textbook customer service.

Jim, however, admits to being somewhat frustrated and relays his story about an ongoing issue involving a shoogly manhole cover near his home. “Every time someone drives over the manhole the cover gets looser and noisier,” he explains. “It’s driving me and my neighbours mad so I’m trying to get it fixed. We’re getting there but it’s a bit of a saga.”

However, his calm demeanour is helping him make inroads and having a few good contacts too is giving him the upper hand. Indeed, the process is not dissimilar to some of the discussions and conversations he’s had during his first year as chairman of the Scottish Licensed Trade Association.

Jim needs little introduction. The former sales director of Maxxium UK retired in 2016 after a career in the licensed trade spanning three decades and was “extremely honoured” when he was asked to take on the important role of SLTA chairman last year, having been a member of the non-executive advisory board.

“The SLTA’s a very special trade association and plays such an important part in our industry,” he says. “The licensed trade has been good to me and I think when you’re in a position to help others and offer the benefit of your experience then you should do that.”

The SLTA has witnessed significant change in recent years and today is run like a business with robust financial controls and clear strategies in place. “Having people like former Scottish Government minister Kenny MacAskill on our non-executive advisory board means that you get a different perspective on certain issues and new ideas,” says Jim.

“Every business has to evolve and trade associations are no different although it’s understandable that change can sometimes be difficult to embrace,” he continues. “You need to be bold and prepared to do things differently – and work in partnership with other trade associations and organisations.”

For example, the SLTA joined forces with the British Hospitality Association in Scotland and the Scottish Tourism Alliance to fight against increases in business rates. It is also throwing its hat into the debate on issues such as deposit return scheme (DRS), VAT on tourism, portion control out of home (OOH) and foods high in fat, sugar or salt (HFSS). Other current issues include the tied house code of practice.

While trade protection, trade development and trade liaison form the core of the SLTA’s raison d’être, so too do the three Rs – revenue, relevance and recruitment. “We have to be honest and say ‘yes, we’re here to build revenue for the long-term benefit of our membership’ because we need to invest in training – that’s absolutely key.

“That means we need corporate support and I have to say to that our supplier partners over the years although they too face challenges and have to be able to justify why they support us – and that means we have to show them that we are a robust and forward-thinking trade association that sees the benefit in collaboration and partnership.”

Part of that forward-thinking approach has been to engage with the younger element of the licensed trade by working in partnership with the Scottish Bartenders Network and offering all Personal Licence Holders free membership of the SLTA.

SLTA is working with Edinburgh-based Flow Hospitality Training. “Online training is the way forward for the licensed trade and we’re extremely grateful to Flow for their support,” says Jim.

“There’s a whole new generation of talent coming through with fresh thinking and innovative ideas and we have a duty to ensure that these future leaders are armed with the skill set to take our industry forward.”

Jim concludes: “The SLTA has come on in leaps and bounds as we continue to raise our profile and work towards improving skills in an industry that encompasses everything from traditional bars and pubs to restaurants, nightclubs, hotels, B&Bs and other hospitality and tourism businesses.

“We have to look at the wider picture and bear in mind that collaboration with others will give us a stronger voice and help the licensed trade stand out as an important industry that offers worthwhile careers and prospects for thousands of people.”