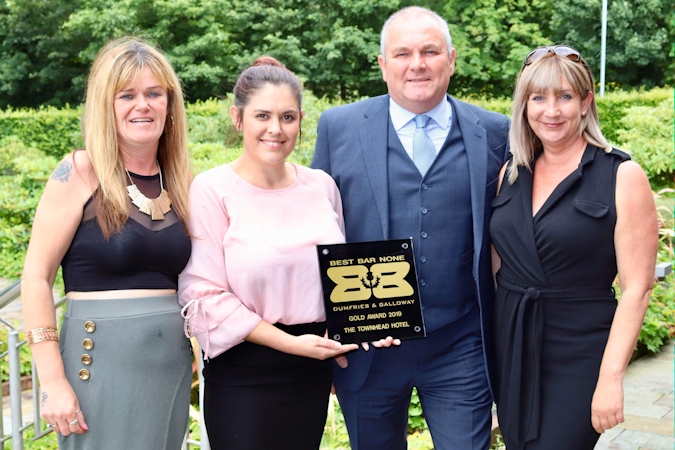 The Townhead Hotel in Lockerbie was one of four local businesses to win prestigious gold awards in the Best Bar None awards in south-west Scotland.

SLTA President-Elect Stephen Montgomery’s business joined Back to the Buck and The Shed, both Annan, and Lochmaben’s The Crown Hotel in winning gold awards in the Best Bar None initiative which was recently reinstated in Dumfries & Galloway.

Silver awards went to the Granary and The Robert The Bruce, both Dumfries. Another Dumfries business, The Barrel, won a bronze award.

The Best Bar None initiative, delivered in the region by the Dumfries and Galloway Alcohol and Drug Partnership, was launched to improve safety and management standards across the licensed trade.

Scott Jardine, the local Best Bar None co-ordinator, said: “I’d like to congratulate all the local winners on their success. All have shown a strong commitment to raising standards and improving safety in their venues.

“We’ve reinvigorated the scheme this year and are encouraging premises around Dumfries, Annan, Lockerbie, Lochmaben and Stranraer to sign up.

“Best Bar None is open to pubs, bars, nightclubs, hotel bars and specialist entertainment venues – including community venues – in the local area. Anyone taking part gets lots of advice and support to improve the safety and resilience of their venues and secure nationally-recognised awards for their efforts.”

National Best Bar None co-ordinator, Robert Hogg, added: “It’s great to see successful premises in south-west Scotland be honoured for their efforts – and for the Alcohol and Drugs Partnership to encourage others to get involved in Best Bar None.

“The scheme is all about supporting businesses to improve safety and standards – and be more sustainable.

“Taking part in Best Bar None offers you an annual assessment of your venue, which can help your day-to-day practices, in turn making you more attractive to customers and boosting your profitability.”

The scheme is supported by the drinks industry – Chivas Brothers-Pernod Ricard, Diageo, Edrington-Beam Suntory UK, Heineken and Tennent’s – as well as the Scottish Government, Police Scotland, the Scottish Fire and Rescue Service, SLTA, Drinkaware, Barnardo’s and others.

You can find more details on the scheme – including contact information online at www.bbnscotland.co.uk