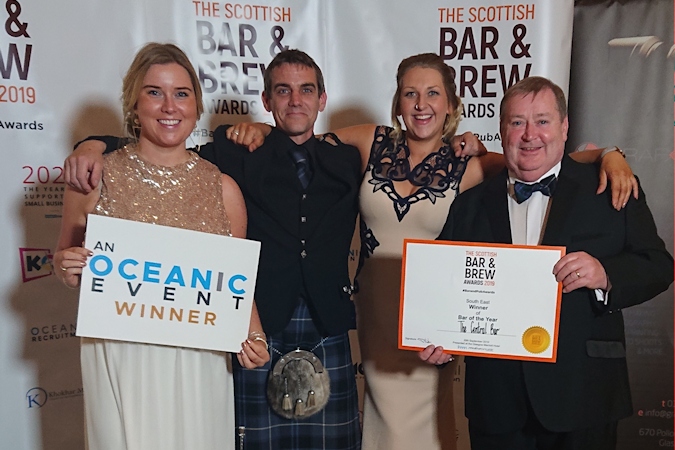 Roddy, who has been in the licensed trade for 25 years and took over the Central Bar at Northgate in 2006, said he was “really surprised” to get a phone call telling him the pub had been shortlisted following votes from customers.

Attending the awards ceremony in Glasgow with his daughter Michelle and two members of staff, Roddy added: “It was a great night out and a boost for the staff to be recognised for their hard work.

“We also got a mention on the Sara Cox show on BBC Radio 2 after Michelle phoned in.”

The Central Bar has undergone several small changes recently. Roddy explained: “We’ve done quite a bit of work to the pub – nothing major, just small things like bringing in some new drinks brands, changing the bar, putting in new fridges and sinks, renovating the toilets.

“We’re a small pub but you can still invest and make a difference for your customers.”

This year, the Central Bar won Silver for its hanging baskets in the annual Peebles in Bloom competition and this month changed its outdoor lighting to red in honour of Remembrance Day.