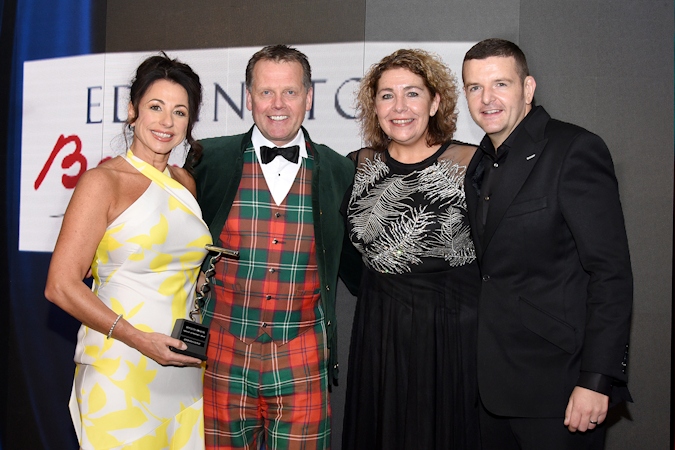 The head of a 150-year-old family business, and a passionate advocate for the Scottish tourism and hospitality industries, was presented with the top award at the 2019 SLTN Awards.

Leckie is the fifth generation of his family to run Perthshire hotel and resort Crieff Hydro and has taken the business to new heights.

Born into the hospitality industry, he was determined to carve out his own career path and, after studying business and hospitality, worked his way up through the ranks at hotels in Scotland and England, before joining the family business in 1994.

His time at the helm of the business has seen him spearhead a multi-million-pound development programme which has established Crieff Hydro as one of Scotland’s leading resorts.

Five years ago, the company expanded outside of its heartland with ventures in the Borders and the Highlands, with these hotels also undergoing extensive refurbishments.

In addition to developing his own business, Leckie plays a crucial role in championing Scottish hospitality and tourism. He is chair of the Scottish Tourism Alliance and heads the Tourism Leadership Group, which oversees the delivery of the national tourism strategy.

The 24th annual SLTN Awards, held in Glasgow and presented by comedian Kevin Bridges, saw Scotland’s top pubs, bars and operators rewarded in front of an audience of 700.

Winners hailed from across the country – from Drumnadrochit to Dundee and Coll – with Licensee of the Year, in association with Kopparberg, going to Graham Guthrie of The Golf Hotel, Crail.